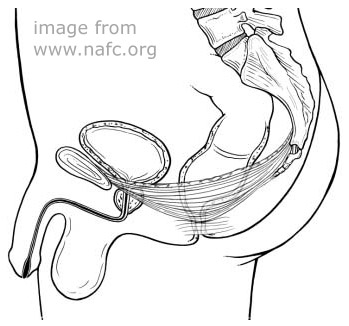 There are two openings through the pelvic floor of men - the anus and the urethra.

Pelvic-floor muscles support our internal organs and allow the passage of urine and faeces.

The pelvic floor muscles support these two openings, but if they are weakened or not in good condition they cannot support the openings effectively.
Pelvic floor muscle exercises can be done to help strengthen weak muscles around the bladder.
When these muscles are weak, urine can leak from the bladder. So in men you are activating your pelvic floor when you try to stop urine from flowing e.g. when you need to hold on. (busting for a leak)
These are the front pelvic muscles.
Men do notice changes in this area - one physiotherapist described it as "pelvic-floor exercises may make you feel 17 again".
Some describe the muscles used to support the pelvic floor as the muscles men use to pull their scrotum up - similar to the muscles used to stop urine from flowing.

But is there any real evidence pelvic-floor exercises in men works?

Recent reports on Radio National have discussed the importance of pelvic floor exercises for men.

Men are reactive hence many men will not do pelvic floor exercises until they really need to. However the physiotherapist interviewed (Stuart Baptist) recommended starting earlier before the need arises.
He uses a machine to give males bio feedback so they can see how they are using the muscles.
However he mentions that you can do the exercises at home but there are subtle ways of cheating.
Hence using a physiotherapist may allow you to isolate the muscles more effectively and achieve better outcomes.

One comment "Two years ago I had my prostrate removed and one of the consequences is leakage, especially when I laugh and at other times. Doing exercises specifically for the Pelvic floor becomes a non event after a while. I found after taking up Ti Chi for exercise is how it has helped me greatly in the is area."

Physiotherapy Pilates and Yoga may be helpful as well as they do emphasise the pelvic floor muscles.
In Yoga and natural healing the root chakra is located between the anus and the sex organs.
It seems the body awareness that is emphasised in Yoga and Pilates does help in effectively learning pelvic-floor excercises.

On the health report 1st August 2011 there was an article on
Pelvic-floor exercises after prostate surgery
This article puts the role of the physiotherapist differently than the Life Matters approach indicating you can learn the exercises yourself or from a brochure.

"Women have been taught them for many years as there's good evidence that in them at least stress incontinence in particular is helped."

"...although prostate surgery is very common and urinary incontinence afterwards is also very common, we discovered that there was hardly any evidence to suggest whether pelvic floor muscle exercises would actually help the men."

"...Now standard care in this country and I'm sure also in Australia would consist of people saying 'well you ought to be doing your pelvic floor exercises'. It often consists of leaflets telling men how to do it and if I take exception to the expression squeeze your butt, it's definitely not your bottom you're meant to be squeezing"

They recruited more than 200 men in each of the four arms of the trial men and ran 2 trials one for men after radical prostatectomy, who'd had surgery for prostate cancer and the other trial was in men who'd had a transurethral resection of the prostate for benign disease. (enlarged prostrate is cored out from the inside.

"What we have not been able to show is whether or not pelvic floor exercises themselves work but we have shown that it is a waste of time and a waste of resources to get a physiotherapist to teach them because the standard care, you know telling people about them and giving them leaflets is obviously sufficiently effective without needing an extra physiotherapist as well."

"I think the important thing is it doesn't mean that pelvic floor exercises don't work but it does mean that you don't have to have a physiotherapist to teach them."

Comment: Gold Coast Physio Sally Buratowski teaches posture and breathing techniques that work on your core including your pelvic-floor.
It is difficult to expect anyone being able to accurately develop a holistic approach to the pelvic-floor and their general strength and core without expert training such as Physiotherapy or Pilates. 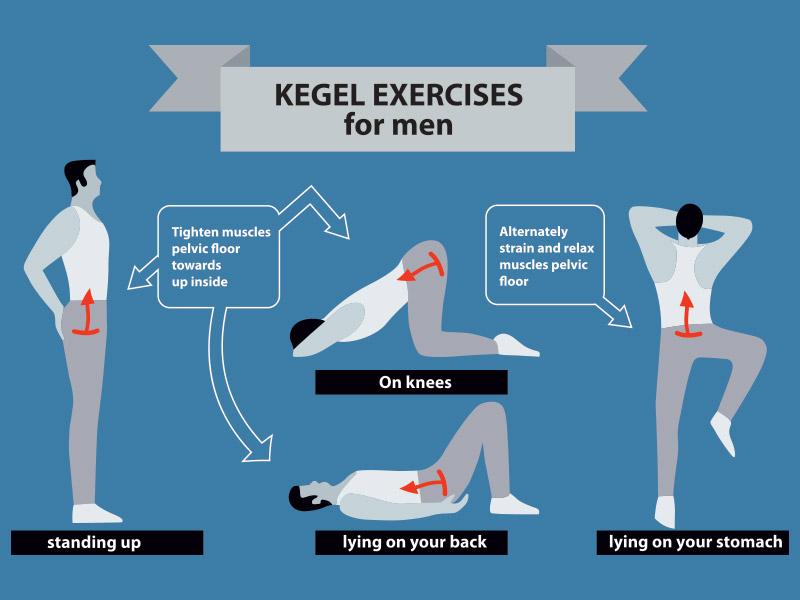